In ancient times a Bannerette was a knight privileged to display, in the field, a square banner (as distinct from a tapering pennon of a simple knight). In 13th century England any commander of a troop of 10 or more lancers who was not an Earl was usually a Bannerette. Later, both in England and France, the style became a title of honour, conferred for distinguished military service. The first Banners awarded to the Australian Army were presented, on 14 November 1904, to:

On the 5th March 1959, His Royal Highness, The Prince Philip, uke of Edinburgh, accepted the appointment of Colonel-in-Chief of the Corps of the Royal Australian Electrical and Mechanical Engineers.

During a Corps Committee Meeting at RAEME Training Centre (RTC) on 12th November 1980, Colonel P.M. Robinson (COMD 3 EME GP), introduced the proposal to obtain a Duke of Edinburgh Banner for the Corps. This proposal was accepted and the DGEME began the necessary action. At the meeting the following year Colonel Tonkin (DDEME) reported on the steps that had been taken and presented two possible designs drawn by a Mr Case Uldriks (Maint Branch).

In December 1981, The Chief of the General Staff, LTGEN Sir Donald Dunstan KBE, CB, gave approval in principle for the Royal Australian Electrical and Mechanical Engineers to be granted a Banner.

The Corps Committee Secretary, Major R.J. Fulford announced that in August His Royal Highness, The Prince Phillip, Duke of Edinburgh, had agreed in principle to present the Banner.

Another conference in September 1982 saw Colonel Tonkin announce that the design was not feasible because the Badge faced away from the staff. (Heraldic Convention states that the head of beast must face the staff or pole that it is being carried by). So the design was changed in and out of session with the new design being submitted that the Corps Badge and the Dukes Cipher in the top left hand corner be placed on the obverse side and the Australian Coat of Arms on the reverse side.

In November 1982 His Royal Highness agreed that the Banner be known as The Prince Phillip Banner. Quarter Scale paintings of each side of the Banner were produced in September 1983 and forwarded to Her Majesty, The Queen for Royal Assent. In December 1983 approval was given.

The Banner was then commissioned and made by RF KEMP PTY LTD MELBOURNE and the associated belt by GEORGE POTTER and COY, ALDERSHOT, ENGLAND. 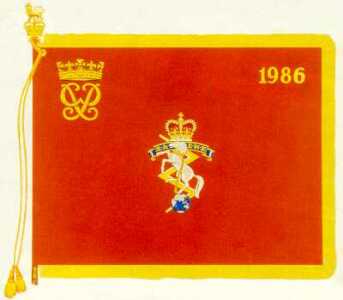 On Tuesday 20 May 1986, His Royal Highness, The Prince Philip, Duke of Edinburgh, Colonel in Chief of the Royal Australian Electrical and Mechanical Engineers (RAEME) presented the Prince Philip Banner to the Corps at a Ceremonial Parade held at the RAEME Training Centre.

The presentation of the Banner represented the Corps service since its inception in 1942.

The parade was made up of four guards each of 6 3 troops from every state in Australia. Troops holding ground were made up of ARES and ARA members of the Corps. 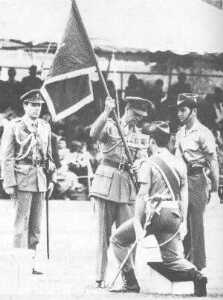 The tradition of Troops Holding Ground is to protect those members of the guard who form a hollow square. In ancient times a unit so formed was vulnerable to surprise attack, this necessitated the posting of sentries whose duties were to "hold ground". The Parade Commander was Lieutenant Colonel Ron Dyne, and the Parade RSM was Warrant Officer Class One Garry O'Brien.

Over 5,000 spectators watched as the Banner was marched onto the parade ground. After being received on parade His Royal Highness, The Prince Philip was invited to inspect the parade by the Parade Commander. In ancient times because allegiances often damaged, the Legion Commanders, by means of personal inspection, established direct contact with each soldier. This served to clearly identify himself to each man so that they could rally to him during the ensuing battle. The troops then formed a hollow square and the Banner was uncased and draped over the piled drums.