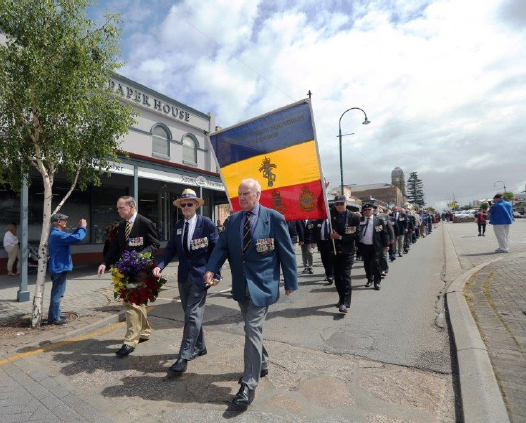 Albany, Western Australia, 16th October 2019. 17 Construction Squadron Workshop Vietnam Association is granted the unique privilege and honor of the “Key to the City”.

On a cool, clear, sunny morning, the members and partners of 17 Construction Squadron Workshop Vietnam Association were bussed from Emu Point to the City of Albany where the main street, York street, was blocked off to traffic in readiness for a parade and service that was to grant the unit the “Key to the City”. This was an auspicious and historic occasion as it was the very first time in the history of the City of Albany that this honor had been bestowed upon any person or organization.

The troops formed up at Alison Hartman Gardens. Led by former Officer Commanding, John Fenton and under the direction of CSM Bob (Ruffy) Fleiner, the parade marched to the Town Hall where Mayor Dennis Wellington was waiting to officially present the unit with a scroll signifying the “Key to the City”.

In his address, Mayor Wellington stated “To those who served in the Squadron, to all of those who served overseas, you all enable us to have the lifestyle we have today”. “This is why we thank you for your service. It will never go unnoticed”.

Former Officer Commanding John Fenton thanked the Mayor and the City of Albany for the honor bestowed on the unit.

With the permission of the Mayor Dennis Wellington, John Fenton then called upon the Secetary/Treasurer of the association Garry (Snow) Whykes to be the official custodian of the scroll.

The parade then proceeded to march down York Street to the Albany War Memorial where a very moving service was held. The MC was Deputy Mayor Cr Greg Stocks who con-ducted the memorial service and wreath laying ceremony.

John Fenton then gave a very moving address to the people in attendance, describing the role of the Workshop in South Vietnam. (A copy of this address is on page 6).

At the completion of the parade and service, the members, partners and guests proceeded to the Due South restaurant for lunch. Thus ending a very significant day in the history of the City of Albany and the 17 Construction Squadron Workshop Vietnam Association. яндекс 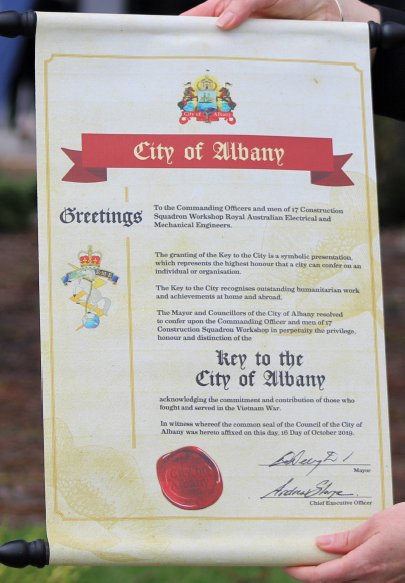