The RAEME Corps March is a combination of two tunes; "Boys in the Backroom" and "Lilli Burlero".

The song "See What the Boys in the Backroom Will Have" or, its abbreviated title, "The Boys in the Backroom" was composed by Friedrich Hollander for the film "Destry Rides Again" which starred Marlene Dietrich and Gary Grant. Released just a few weeks after the outbreak of WWII, "Destry Rides Again" was one of Hollywood's most successful productions of 1939 and was to be the first film to satirise the Hollywood Western - a forerunner of "Cat Ballou", "Blazing Saddles" etc.

Marlene Dietrich portrayed "Frenchie", a brawling dance hall girl who, in one of the film's highlights, jumps up onto the bar of the "Last Chance Saloon" to sing the now famous song which is part of our RAEME March. 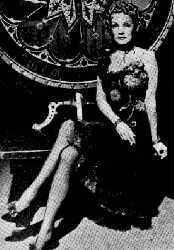 And when I die don't spend my moneyOn flowers and my picture in a frame.

And when I die don't buy a casket
of silver with the candles all aflame.

And when I die don't pay the preacherFor speaking of my glory and my fame.

(Note: These are the original words and format which differ slightly from the arrangement used in the RAEME March).

In the first years of WWII Great Britain (and the Free World) was fortunate to have the services of Lord Beaverbrook who Churchill appointed Minister of Aircraft Production. Aircraft losses were then 3 to 1 in favour of the Germans however, as early as late 1940, Beaverbrook had boosted British aircraft production to 1600 operational aircraft a month. His contribution to the war effort, particularly during those early dark days, was significant and invaluable to say the least.

A film enthusiast with a private cinema, he was apparently infatuated with Marlene Dietrich as were probably millions of servicemen at that time, and as Nigel Rees records in his book "Sayings of the Century" - Beaverbrook once said that "Marlene Dietrich singing "The Boys in the Backroom" is a greater work of art than the Mona Lisa"!

The phrase "backroom boys" had been an American saying which dated back to the 1870s with its image of cowboys doing their "serious" drinking and gambling in a saloon backroom uninterrupted by the riotous behaviour in the front room (bar).

However, it is Lord Beaverbrook who is credited with the modern application of back room boys to scientific and technical "Boffins". In a BBC radio broadcast on 19 March 1941 on the matter of record aircraft production he said:

"Let me say that the credit belongs to the boys in the back rooms. It isn't the man who sits in the limelight like me who should have the praise. It is not the men who sit in prominent places. It is the men in the back rooms."

According to Rees, Lord Beaverbrook's inspiration for this speech was Marlene singing "See What the Boys in the Backroom Will Have". His new application of the song's title was to eventually influence the RAEME Corps March.

It is now more than 30 years since "The Boys in the Backroom" and "Lilli Burlero" officially became the RAEME march although it was first proposed a decade before. The combination was arranged by LtCol A.R. Newman MBE, the then Director of Music, replacing the earlier Corps march. "Lilli Burlero" was always well received as it provided a traditional link with REME while preserving a martial theme which suited RAEME's "charter".

Boys in the Backroom